Adam, who has Learning Difficulties, ADHD and difficulties with speech and language, was praised for his “perseverance and resilience” by Sport Development Officer for The Greenbank Project, Mark Palmer. Adam was the only child to play in the adult league last season.

“Adam is a student at Clare Mount Specialist Sports College on the Wirral, a regular attendee at Panathlon days, took up bowling for fun about four years ago during the school holidays and he loved it.

“To say he struggled was an understatement! Adam is now used as an example to any new bowlers at the club who struggle to start with, showing that you can get there. He is a fantastic role model.”

Adam, who bowls four times a week at Bromborough YBC and is the Under-16s Cheshire County Champion, received the award from Abdi Jama, a bronze medallist in Wheelchair Basketball at Beijing 2008.

“Adam’s second home is the bowling alley; all the staff there know him and love him. Bowling is the environment where he can thrive,” added Palmer.

“Adam’s parents struggled for years to find ‘the sport’ for him and they feel so lucky to have stumbled upon bowling!”

Knowsley Central School has been flourishing in recent years, collecting numerous accolades including Sainsbury’s School Sport Gold Award for four straight years. They have also excelled in Panathlon competitions, including a victory in our Merseyside Schools Pan-disability boccia tournament in November. 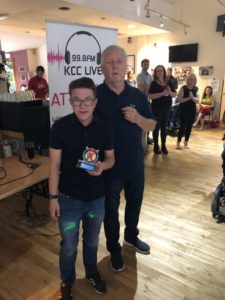 The Liverpool school has progressed so quickly in competitions by encouraging a philosophy which gives “every pupil the opportunity to represent a team” which fits perfectly with Panathlon’s philosophy.

The impact on the children can be seen in the school’s recent results as they reached the Lord’s Taverners National Boccia Schools Finals after triumphs at the Panathlon run Knowsley, Merseyside and North-West finals.

Knowsley Central has seen pupils get involved in a wide array of sports offered by the programme run by Steve Sullian at Greenbank and funded by Panathlon.

“The school has excelled in competitions, allowing pupils to develop their competitiveness, understand how to accept winning and losing, improving social skills and confidence,” said Palmer, a former two-time Paralympian.

“Knowsley Central is a small school with only 96 pupils but has developed beyond its numbers in PE and sport. Every year the pupils enter more competitions and are given opportunities to shine in a wide variety of sports.

“The pupils in Knowsley Central now love PE and take part with a great attitude and spirit.”