Over 50 deaf and hearing impaired young people from across London came together in Islington today for the first ever London Deaf Panathlon Challenge.

The students from schools in four London boroughs competed in Panathlon’s first ever multi-sport contest held in the capital specifically for deaf and hearing-impaired children – part of the charity’s expanding deaf programme that will involve over 600 young people this year.

In a change to the traditional Panathlon format, the students from Kingsbury Green Primary School in Brent, Blanche Nevile School in Haringey, Norwood Green School in Hounslow and Laycock Primary School in Islington were mixed up to form four brand new teams, each containing representatives from all four schools.

This provided the children with not only the opportunity to compete against other deaf and hearing-impaired children in a multi-sport contest, but also to build teamwork, communication and leadership skills, meet new people and make new friends.

“The kids have enjoyed the day,” said Naomi Thomas, communication support worker at Blanche Nevile School. “It’s nice for them to interact, play sports and socialise with other deaf children.

“Panathlon gives our children a chance to get involved in sports. They often play sport with mainstream kids, but today gives them an opportunity to have their own day, which helps with their identity as a deaf child.”

The four new teams – named the Red Devils, Green Tornadoes, Blue Blizzards and Yellow Fireballs – battled it out at boccia, new age kurling, table cricket, polybat and field athletics, with the Green Tornadoes taking first place, much to the delight of the team (pictured above). 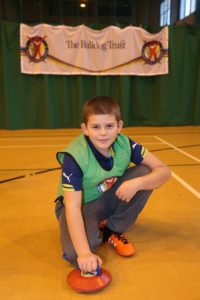 “It feels very nice, like we’ve won the Olympics. It was nice taking part with children from other schools. We helped each other to win.”

School-mate Judy Johnson, aged 10 and a member of second-placed Yellow Fireballs, said: ​“I’ve had a good time. I’ve been playing kurling. I like playing against others and sometimes you win.

“I came second today. I was very excited to take part with people from other schools. I’m really happy to have a silver medal.”

Panathlon provides sporting opportunities for over 7,500 disabled young people each year across London and 27 counties nationwide.

Our deaf programme began in November 2013 with a deaf boccia tournament in London and it has been expanding at a rapid rate since.

“The chance to participate in a team alongside peers from other schools enhances the competition and provides a raft of opportunities for these children. It helps them build communication, teamwork and leadership skills, whilst enabling them to build new friendships.”

The London Deaf Panathlon was superbly officiated by a team of deaf students from Oak Lodge School in Wandsworth, who have been been trained as Panathlon young leaders and who used sign language to communicate with the young competitors.

Panathlon’s deaf programme in London is supported by the City Bridge Trust, the Bulldog Trust and the Ovingdean Hall Foundation. Last year 16 schools competed across the capital as part of the programme.