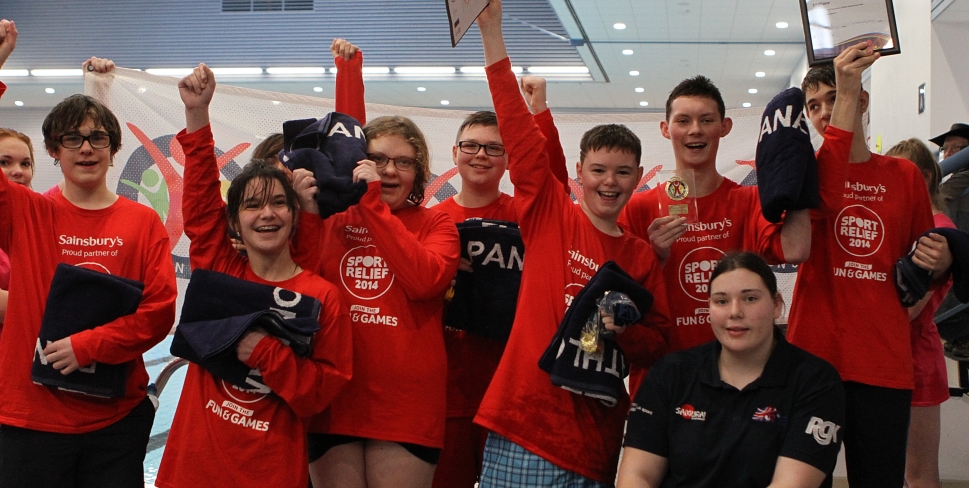 The third annual Panathlon Challenge Suffolk Swim Gala, which took place at Crown Pools in Ipswich this week, provided a “special” day of competition for over 100 disabled children.

Teams from 13 schools across Suffolk took to the water in two competitions – the Panathlon Swim Challenge and the Discovery Swim Challenge – which combined individual events and fun team challenges for swimmers of all abilities.

The Panathlon Swim Challenge was won by Bury’s Priory School, who booked themselves a place in the South of England Swim Finals at the Olympic Park’s Aquatic Centre in July.

Reflecting on their success, Priory teacher Jane Chave described the day as “terrific”, while 14-year-old Colby Butlin said it was “awesome” (read more from them in our main story), but every team was full of positive feedback what proved to be a fantastic event. 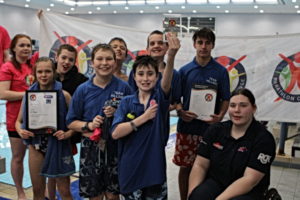 Jan Aries, teacher at Hillside Special School (pictured right), who finished as runners-up behind Priory School, felt the event brought out the best in everyone.

“There’s a real team spirit among all the teams here,” she said. “Our team fell apart at the last minute due to various reasons and Stone Lodge Academy have lent us three of their swimmers to make our team up, so that’s really special.

“The children enjoy the challenge of a day like today. That really gives them confidence, even for the less-confident ones. Also the understanding that it’s OK not to come first every time. They are absolutely fine with that, as long as they have taken part.”

Teresa Hills, swimming instructor at Thomas Wolsey School, who finished third in the Panathlon Swim Challenge, echoed Jan’s thoughts, saying: “The kids are really having a good time. They look forward to coming and they’ve done reasonably well, so they are really happy.

“It’s fun and the children learn through fun. They can play here and they see everybody together, rather than just where we are at school. They’re all pleased to be here, they like the atmosphere and, win or lose, they’ll be happy because they’ll go away with a medal of some description. They’ll be really pleased.”

Claire Hale, PE coordinator at Stone Lodge Academy, said: “It’s been fantastic. It’s always a really good event and it gives some of our children the opportunity to do something they don’t usually get to do, which is the main thing.

“The kids have had a lovely time. They were dead nervous when we got here, but since they’ve got in the water and done their bit, they love it.

“A lot of our children don’t normally get the opportunity to do things like this. We can do things at school for them, but it’s easy for them to get cocooned into what they are doing, but at events like this they can socialise with other teams. We’ve had three of our children swim for another team today, so in terms of developing independence and social skills it’s fantastic.

“It’s not just about learning sport. It’s about developing so much more than that, which is why we come to as many Panathlon and Discovery events as we can.”

The final team in the Panathlon Swim Challenge line-up were The Bridge School – a school in Ipswich for children with severe learning difficulties and autism.

Not used to swimming in large gala events, a few of the team members were overawed by the occasion but, despite finishing in last place, swimming teacher Francis Harbour said the event was a great experience for her team.

“I think events like this are very important,” she said. “We’ve got to give them experience. A lot of these kids, they don’t go out. Their parents are frightened to take them out, so to let them be out in society with other people is a really nice experience.

“We’ve got our own swimming pool so they feel safe there, but to come somewhere like this – it’s deep, it’s cold, it’s unfamiliar – it’s a great experience for them. Some can take it, others can’t so well, but it’s important for them all to experience it.

“Swimming is really important. My concern, especially with the lack I understanding our students have, is that if they can swim, they can save themselves if they fall in water. It’s all about safety. Their swimming ability has really developed during their time with us.

The Discovery Swim Challenge was won by Holbrook Academy (pictured below left), who were “delighted” with the result, according to their co-coordinator of PE, Juliet Wiles.

“Our team is delighted,” she said. “Last year we came second to Felixstowe Academy and we’ve got a young team this year, so we didn’t expect to win it. They just came and had fun and worked hard. What a lovely surprise! 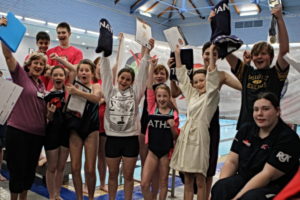 “It’s a great event. We get children involved who wouldn’t normally perhaps enter competitions, which is fantastic. It’s a real confidence builder for them. They love coming.

“They work hard as a team and put their bit in. Even the least-able swimmer in the group, just the smile on her face was fantastic. Lots of these children have never won anything so to have that was quite something. It’s very special for them.

“These kids wouldn’t normally perhaps get into a school netball or football team, but this is somewhere they can come and make friends, have a good time and have some competition and be recognised for achievement and progress, so it’s fantastic.”