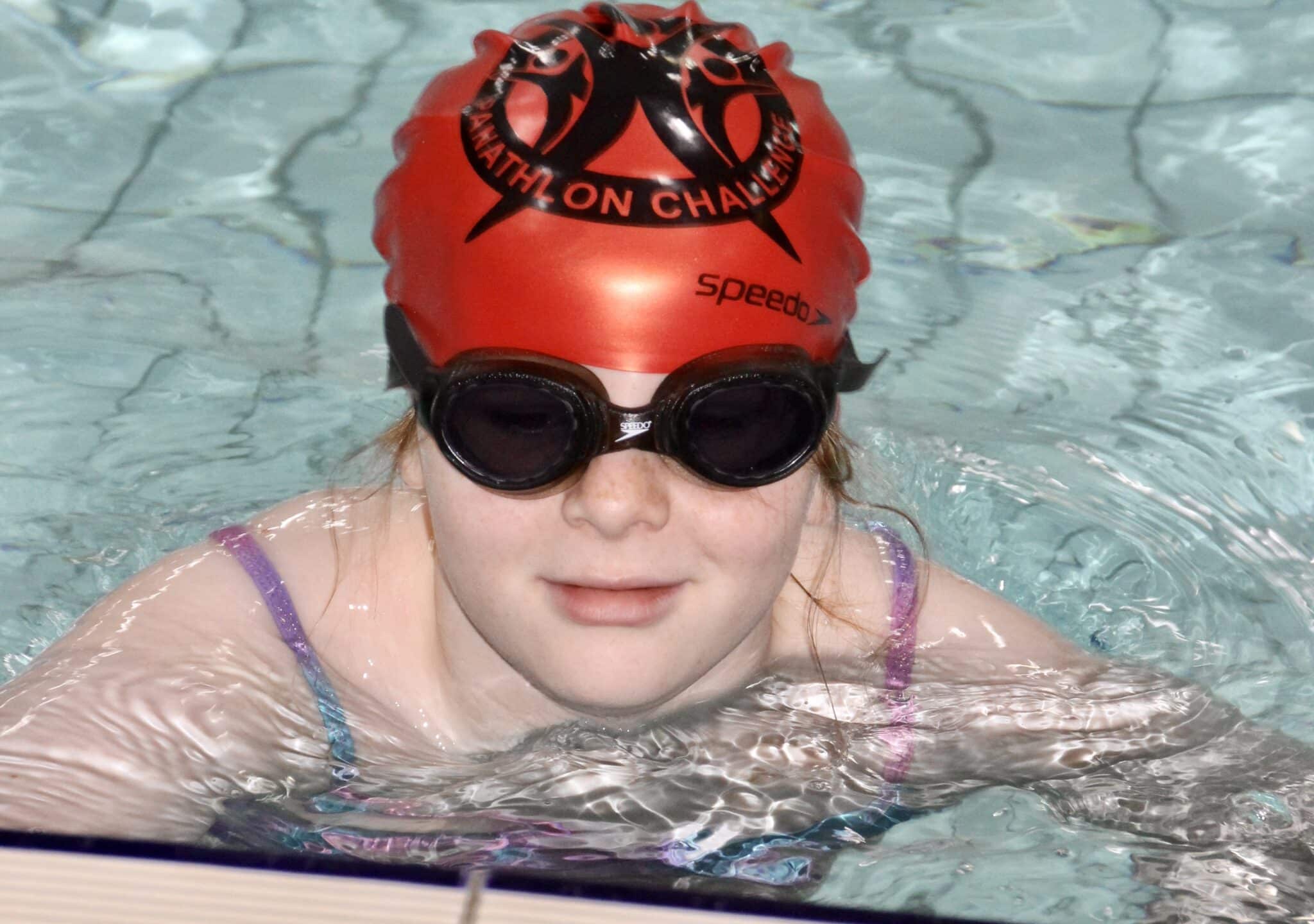 Ten-year-old Jessica Nevison was the inspiration behind the first ever Panathlon primary swimming gala for pupils with disabilities and special needs in Cumbria.

Five local schools competed in the event staged in partnership with Active Cumbria at Kendal Leisure Centre on Thursday (3 November), including Jessica from Beaconside Primary School in Penrith.

>> Check out our picture gallery from the Kendal gala here <<

After a huge programme of Panathlon events in Cumbria last academic year, including county finals, Active Cumbria conducted focus groups to ask staff and pupils what other sporting competitions they would like to participate in. Jessica responded that she would love to take part in a swimming gala – so we got to work organising one!

Jessica (pictured above) was – of course – selected on the Beaconside team who finished in third place in the gala, which followed our ‘Discovery’ format to engage pupils like Jessica who lack skills and confidence in the water.

“It’s been really good – I have absolutely loved it. I am really proud of myself,” she said.

Beaconside Primary’s Assistant Deputy Head, Sara Prickett, commented: “Jessica was a non-swimmer but we started doing swimming in school and when she said she would like to compete in a competition it was amazing.

“It’s so nice to see all the children here taking part in something they wouldn’t normally get to do and to know it’s happened because of Jessica’s comment.”

Beaconside pupils have been to two previous Panathlon events in Cumbria and will attend our primary multisport competition in Penrith later this month. Miss Prickett said: “We’ve already noticed a massive impact; a big increase in confidence and a willingness to have a go at things that they wouldn’t normally get to try outside of school.”

Kirsty Williamson, Active Cumbria’s Children and Young People Education Lead, welcomed the partnership with Panathlon and the opportunities it is opening up for SEND children across the county.

Panathlon activity has exploded across Cumbria since many schools in the county engaged with our Virtual Panathlon programme during the pandemic.

“Children with SEND and who are less active are our target audience this year, so Panathlon are perfect in meeting that need,” said Kirsty.

“Having them as specialists in this field is absolutely invaluable. They allow us to provide a breadth of opportunities which has previously proved difficult as we are such a massive geographical county.

“Panathlon events are so professional, slick and well organised. We have utter faith and confidence in them. You can see how much children are benefiting. It has created a huge demand from schools for more.”

The gold medal winners in Kendal were a joint team from Arnside and St Thomas’ primary schools. Jeanette Shipperd, Head of PE at Arnside, said: “I’ve been in this role for a long time and always felt provision for special needs pupils was a gap that needed addressing.

“That’s why Panathlon is such a fantastic opportunity for them. It’s brilliant that competitions are now local to us and provides us with opportunities we’ve not had before. They are pitched at exactly the right level to be accessible to everyone. The buzz when they go back to school, show off their medals and tell everyone how they got on is great to see.”

One Arnside pupil with cerebral palsy, Millie, was unable to attend the gala due to a commitment at school, but we arranged for her to join another school’s team at our Morecambe primary 10-pin bowling final before half term. “Panathlon has really given Millie a chance to shine,” said Jeanette. “We can’t thank you enough for the opportunity you’ve given her – she gets so much out of it.”

“We’ve put a lot of work in with several pupils to get them ready for today’s competition,” he said. “One pupil in particular refused to come, then said he ‘might do it’, then insisted he wasn’t getting in the pool. But look at him now! He’s made amazing progress.

“Our pupils don’t normally cope if they’re under pressure and struggle to deal with winning and losing. Putting them in this position, stretching and challenging them, is so beneficial.”

He added: “A few years ago, there wasn’t much going on in this area but we’re so happy to have this community built by Active Cumbria and Panathlon. We’ve competed in 10-pin bowling and a multisport competition and we’re super keen for the next one!”

Oversands are part of the Witherslack Group, a Trust of special schools spread across England. We are currently organising a competition for their schools across the organisation.

The gala was brilliantly marshalled and officiated by Year 6 pupils from St Mark’s CofE Primary School in Kendal (pictured above). The gala was the culmination of a six-week young leaders course as part of the curriculum to increase their confidence as well as social and leadership skills.

“What a wonderful experience this has been for them,” said SENCO and sports coordinator Sherie Paxton. “They have been very interactive with the other children and put into practice many of the skills we’ve learned. It has been an unforgettable experience and I’m so proud of them.”

Huge thanks to our partners Active Cumbria as well as our sponsors Pentlands Brands, GLL and St. James’s Place Charitable Foundation.

Children with SEND in Cumbria are revelling in opportunities to take part in competitive sport thanks to Panathlon’s burgeoning calendar of events across the county.