Panathlon’s powerful effect on disabled and SEN pupils at mainstream schools was amply demonstrated at Thursday’s Essex Primary Swim Final at the Aquatics Centre in London.

The competition featured eight schools from across Essex battling it out at the London 2012 venue for the title of Panathlon county swimming champions. For the second year running, it was St Helens Catholic Primary in Brentwood who took home the gold medals.

St Helens’ impressive total of 83 across the range of aquatic races and challenges put them 18 points clear of second-placed Quilters Primary from Billericay, with Beckers Green in Braintree finishing third, just two points further back on 63.

“The impact of Panathlon on our school has been massive,” reflected Alan Proudfoot, PE teacher at Burnham-on-Crouch Primary School, whose team finished fourth.

“Two and a half years ago, some of our children with various needs were simply not accessing competitive sports activities at all. We now regularly compete in boccia, swimming and we’ve now signed up for the ten-pin bowling.

“At our school, inclusion is high up our list of priorities, but the simple fact is having a level playing field where the children compete against their peers with similar challenges is a wonderful opportunity for them, and it’s not something we can otherwise access out in the far east of Essex. For us as a school, Panathlon has opened up so many opportunities and really helps our kids to strive to be their very best.”

There’s no better example of this than nine-year-old Lenny Rush. The Burnham-on-Crouch pupil has a rare form of dwarfism – Spondyloepiphyseal Dysplasia Congenita (SED) – and used to have anxieties about getting in the water after major operations on his legs.

Panathlon played a big part in Lenny gaining physical confidence and self-esteem. He won our Woodland Group Essex Outstanding Achiever of the Year award last summer, and even acted on stage alongside Notting Hill star Rhys Ifans in A Christmas Carol at the Old Vic. 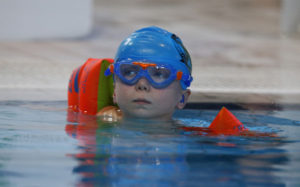 “It’s really breath-taking here,” Lenny (right) said. “A lot of people don’t get to do things like this at the Olympic pool. It’s really cool. You get to compete against people with all disabilities which is great for us.”

Sue Crace, Head teacher of Downham School, revealed the wide-ranging impact that Panathlon has had on her school in Billericay.

“It has bonded our parents”

“It’s been felt across the whole school,” she said. “Confidence is the biggest thing it gives the kids. We have a big growth mindset ethos at our school, and we always encourage them that they can do anything despite their difficulties. Panathlon is perfect for that.

“Every Friday, the children are re-awarded their medals in front of the whole school in assembly and it’s so nice to see the way the other children support these kids.

“Another benefit has been that our parents have really bonded together through this. We now have a coffee morning for parents of our special needs pupils, and that all came from last year’s Panathlon swimming event here. They said it was so lovely to all be together and talk through their shared experiences that it’s carried on ever since.” 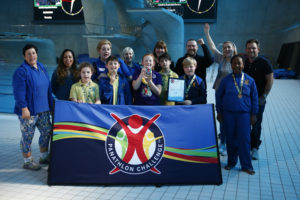 “Ellie has qualified for our school swimming gala again this year and never, ever wanted her parents to watch but this year she’s finally happy for them to come. I think this [Panathlon] has given her the confidence to let them watch her. That kind of outcome is very important.”

Ellie herself said: “I’ve competed in all three Panathlons we’ve done. I love how fun they are and how you work as a team. When you’re very nervous you get in the pool and you just don’t feel nervous any more, because you know you can do it.”

Quilters Primary have competed in Panathlon’s ten-pin bowling, boccia, multi-sports and swimming events. Their SENCO, Rachel Fitzgerald, commented: “These pupils can now stand in front of all the pupils in assembly and are able to say, ‘I am as good, if not better, than lots of you, I can compete just like you can.’

“I’ve had children attend these events who have never won a medal or certificate before, and I’ve had parents in tears, saying ‘thank you so much, because my child has never been asked to any events like this.’ It’s pretty powerful stuff. We ask children at the end of summer term the best thing they’ve achieved this year, and often the answer will be Panathlon.”

She added: “We have a special needs school near us which is over-subscribed and the overspill now come to us because they’ve heard about us getting so heavily involved in things like this. None of our special needs children are prevented from going to [mainstream] events or clubs, but it’s just so pleasing and beneficial for them to have their own competitions too. They can be themselves here, it’s just fabulous.”

This is echoed by Philip Brown, Head Teacher at All Saints (who finished in sixth place) who called the event “a brilliant opportunity for kids with special needs to really shine”.

Pupil Cameron Barnett, nine, said: “It’s my first time ever playing for my school. It’s really fun and I feel so lucky.”

Mr Brown concluded: “It’s really good for some of our more able children to see their colleagues prospering and being involved in such a huge event. Ultimately it builds their self-esteem when their classmates are asking them about swimming at the Olympic Park. Suddenly, they’re super stars, they’re the ones to be envied.”

Our intern Freya Levy, the former women’s wheelchair basketball international, has visited Burnham-on-Crouch, Downham and Quilters schools this term to deliver Panathlon sessions and show staff what disabled and SEN children can achieve. It has helped make Essex into a thriving hub of primary activity.

Tony Waymouth, Panathlon’s Chief Operating Officer, said: “We have had real success in Essex with new schools wanting to join each competition we stage. We are able to offer a wide variety of activity and as teachers and pupils told us today at the Aquatics Centre, their involvement is having a big impact on each school. The level of competition offered enables the children to feel confident and positive about competing.” 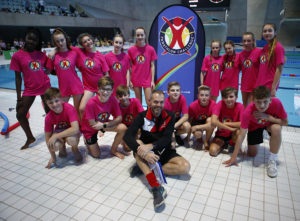 The day’s Young Leaders were Year 8 pupils from Burnt Mill Academy in Harlow. Thank you to our supporters without whom the competitions would not have been possible.