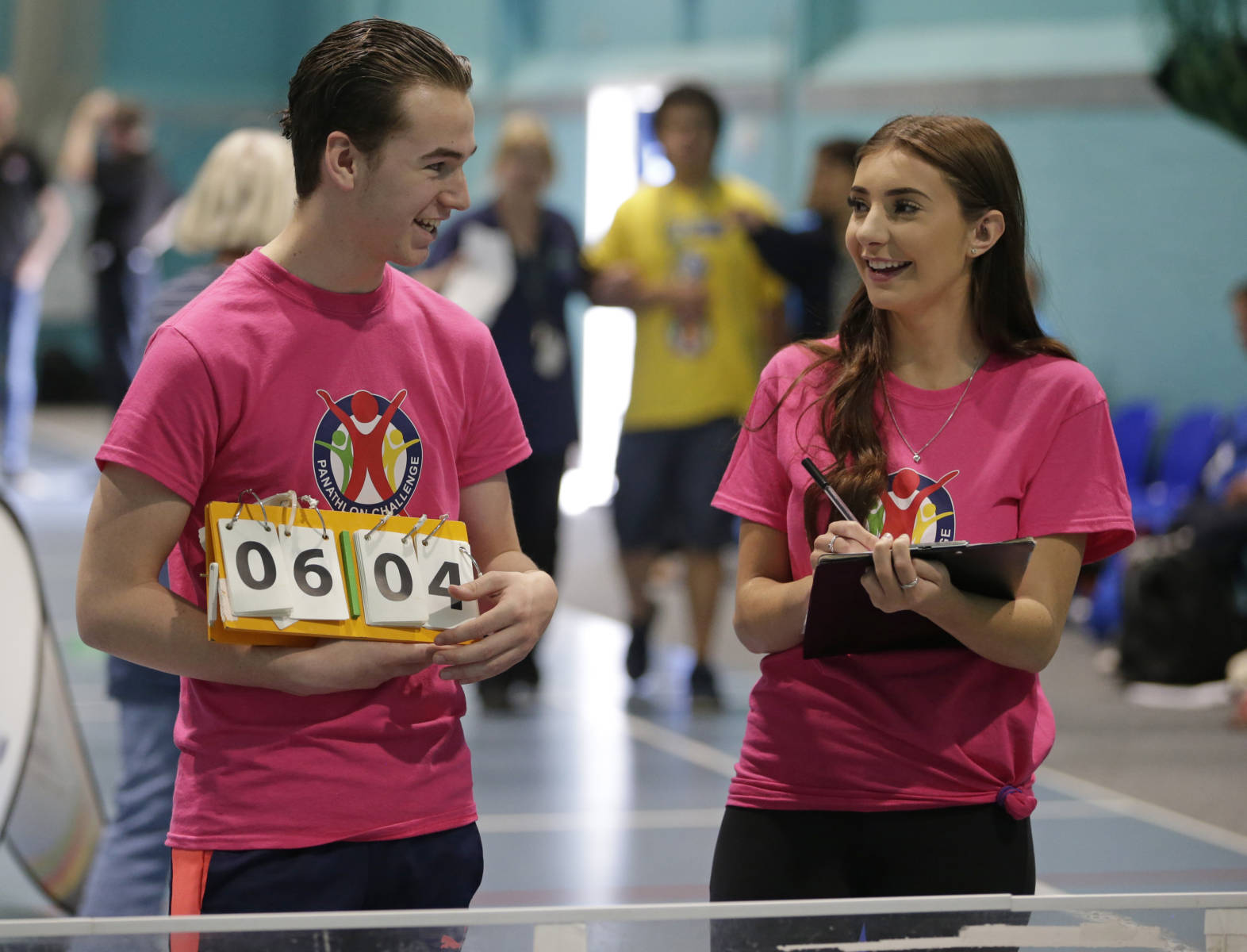 London 2012 GB wheelchair rugby captain Steve Brown was the star guest as The Malling School celebrated its 10th anniversary of dedication to Panathlon on Thursday.

The school, near Maidstone in Kent, first got involved with Panathlon in 2009. Since then it has seen over 200 of its pupils become trained as Young Leaders, as well as an estimated 1,000 students from all over Kent compete in one of the 20 competitions it has hosted.

The event that marked the school’s decade as Panathlon devotees was Thursday’s West Kent Final, which was won by Gravesham with 50 points, just edging out a joint team from The Malling and Sevenoaks (48), with Tonbridge and West Kent third (46). Full results here.

Paralympian Steve, who since retiring as an athlete has forged a career as host of TV’s Countryfile and Springwatch, was on hand to inspire the 80 young Panathletes and present trophies and medals. He also took the time to interview Emma Stone, 17, and Jack McEvoy, 18, who were part of The Malling School’s team of Young Leaders on the day. 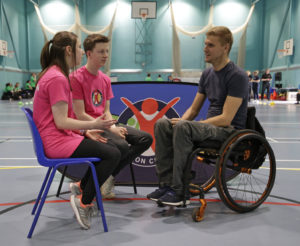 Jack explained to Steve the benefits of The Malling’s decade-long tradition of providing its pupils with Panathlon Young Leader opportunities.

“I’ve always been involved in sport and it’s really nice to help other people who can sometimes find it harder to participate,” Jack explained. “I love it when the children get really excited and seeing the enjoyment they get from it is so fulfilling. It’s a nice feeling to help children achieve something they can be justifiably proud of.”

Whilst it was Jack’s third time as a Young Leader, it was a debut for his fellow Malling School pupil Emma. She was just as effusive about the experience.

“You can feel the energy; everyone’s smiling,” she said. “Before today I’d never played boccia in my life, but I’m now really into it! I’ve refereed it, now I want to give it a go. I just hope I’ve been able to show these kids that they can do sport regardless of their physical disabilities or learning difficulties.

“Sport has always been a passion of mine – I do martial arts and rugby – and it has had such a positive impact on my life that I don’t see why there should be any limitations on what it should give to anyone else.”

Steve, a former wheelchair rugby European champion who hails from nearby Chatham, gave a heartfelt tribute to the Young Leaders: “The sort of excitement, teamwork and togetherness we’ve seen here today from the competitors is something that everyone deserves the opportunity to experience. These Young Leaders sticking their hands up to volunteer is what makes that possible.” 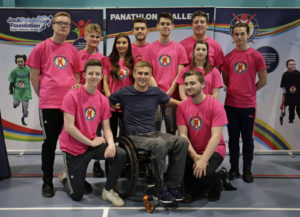 Another of the Young Leader team was 19-year-old Eliza Wopling, who added: “The kids are so lovely to work with and every single one of them has a massive smile on their face. This is a voluntary role but all of us jumped at the chance to come and do it again. I’d recommend that anyone give this a go, just grab the opportunity with both hands.”

Teacher James Barnes was involved in setting up the first Panathlon to be held at the school 10 years ago and was instrumental in the training of Young Leaders for many years. He remains at the school to this day, and revealed some of the positive knock-on effects that the Young Leaders role has led to.

He commented: “The best thing is seeing the students take ownership of the events entirely by themselves. Not many students have the opportunity to lead and organise activities for local disabled children with limited or no teacher support.

“Panathlon simply trust them to get on with the job, having obviously trained them up fully to do so, and that empowers them. They’re taking responsibility and they feel rewarded for it.

“We find that acting as Young Leaders is an excellent example the students can use in their interviews and UCAS forms for university. When they are asked such questions as, ’What have you done to impact your community?’ they are equipped with a solid example, which directly benefits their future prospects.”

The benefits of schools immersing themselves in Panathlon’s programmes are not, of course, limited to being Young Leaders. Many more thrive on the experience of competing, including pupils with disabilities and special needs from The Malling School, who finished with silver medals.

Teacher Leigh-Ann Cook reflected: “These events, and the other events that our SEN children take part in, all help increase their confidence, improve their social skills and reduce their anxiety levels. We’ve got a couple here today who have never done an event before. These are students who would not necessarily take part in PE willingly, but this allows them to think, ‘I can actually do this!’” 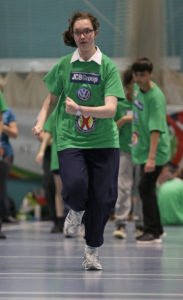 Head teacher John Vennant, who was only appointed in September so was witnessing Panathlon in action for the first time, said: “This is so inspiring to see the effect it has on the young athletes, as well as on the Young Leaders. We look forward to supporting Panathlon at our school for the next 10 years and beyond!”

Gold medal winners Gravesham, who now go through to the Kent-wide Final on June 25th, have been taking part in Panathlon for many years. Teacher Richard Skirving reflected: “They get that sense of achievement which is so wonderful. Back in school, our Panathlon trophies and medals are on display and it gives our students a real sense of pride.”

Sukhi Lall, teacher in charge of the third-placed Tonbridge and West Kent team, added: “We have a full range of disabilities at our school and although we try to do as much sport as possible, this is one of our only outlets to enable them to compete. They love coming here every year and it’s a real fixture on the calendar. They take social skills and a lot more confidence away from today. It makes a big impact.”

Thanks to our long term supporters the JCB Group, who have numerous car dealerships throughout Kent and Sussex.