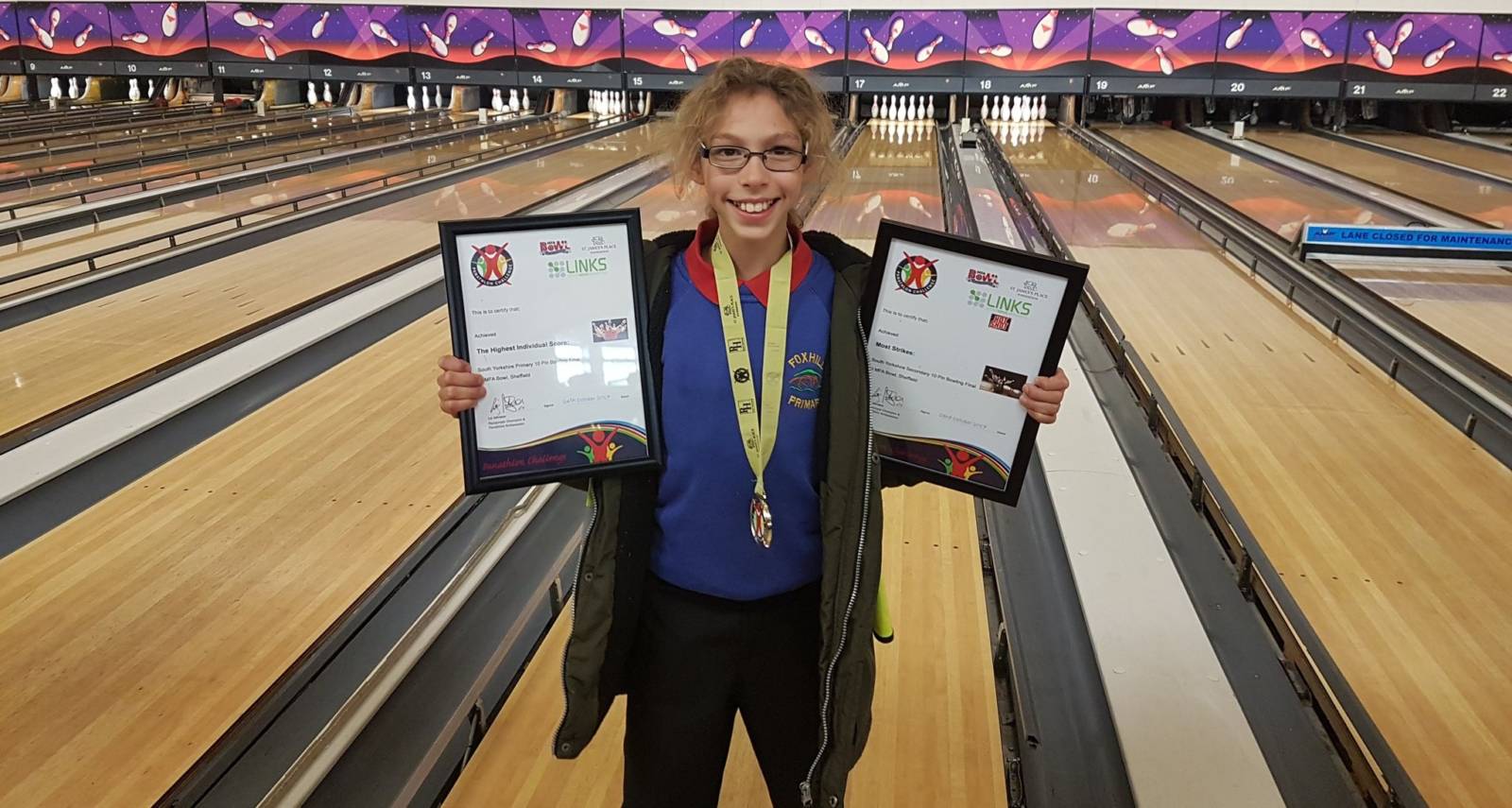 After the success of our ten-pin bowling competitions in other parts of the country, Panathlon rolled into Sheffield for three consecutive days of activity from October 24-26.

Originally scheduled as a one-day event, interest from schools was so great that this was extended to three days, with different age groups competing on each day. Primary and secondary competitions included 266 children from 34 primary schools and 10 secondary schools.

The winners in each competition were decided on the average score of the whole team each day.

In the secondary school event, Heritage came out on top with a score of 110.33 from Abbey School of Rotherham’s 105.16 in the five-team event. Highlight of the day was the highest score achieved by Edison Jones of Heritage in the secondary competition with 178. He also recorded most strikes with four.

There was a tie in the primary competition with Fox Hill’s Xander Hodgson (pictured above with his certificates) and Demi Leigh, from Heritage Park, both totalling 138. Xander gained most strikes with four.

In the secondary school event Springs came out on top with a score of 98.33, ahead of Park School with 94.16. Bless Mayakamene was the stand-out performer with a top score of 146.

Saira from Netheredge School commented: “It wasn’t good, it wasn’t awesome, it was rapid! Sooo rapid!”

Other highlights came in the Primary Hot shots, with Ella of St Pats and Moheez of Mossbrook both scoring 121 and five children securing two strikes each.

Day three saw Barnsley’s Greenacre Primary secure victory in the 11 team primary event with an average score of 100, finishing just ahead of Maltby Hilltop with 99.83, knocking Nethergreen into a narrow third with 98.4.

In the secondary school event, Maltby Hilltop reversed the order by securing the win with 103.67, with Greenacre second with 100. Highest scores were achieved by Lucas from Maltby with 135 in secondary, Oliver Reed of Kelford in Rotherham in the primary with 122 and Jo Pearson of Greenacre in the primary with three strikes.

Across the three days, Foxhill took the Primary crown from Pipworth, and Heritage Park the Secondary crown.

Marie Phippen of Pipworth School said: “Go Team Pipworth! I give it five million out of 10 for today. What a great day!”

Vicky Otley of overall winners in Primary Foxhill said: “What a great event, I can’t believe we have won! We haven’t been out for a few years and now we are looking forward to more Panathlon events. Thank you so much.

Jake Westlake from Maltby Hilltop added: “It’s been a brilliant day and it’s great to bring different children to those who attend the multi-sport competitions. These children can’t compete in the multi-sport but something like this is perfect for them. They have loved their day out and enjoyed the competition, thank you!”

Panathlon extends a special thanks to Helen Solly and Dawn Wood of Links Schools Partnership for making the number of schools attending possible. We also thank the MFA bowl in Sheffield for hosting all three days.