Today was the climax of the Essex Panathlon Challenge at Basildon Sports Village which formed part of the Essex Schools Games Finals. This involved the 4 qualifiers from the previous rounds in May, which were Columbus School from Chelmsford, Lexden Springs from Colchester, Shorefields & Marketfields from Tendring and Beacon Hill from Thurrock.

Team Thurrock were trying hard to re-gain their crown last won in 2012, from current champions Tendring. Competing strongly also were Columbus from Chelmsford, in their first ever Final, and despite a small team, did incredibly well by winning Boccia and coming second in Kurling and Table Cricket. However Thurrock proved too strong and won both the athletics disciplines of field and races, plus wins in Kurling and Cricket to take the title by 6 clear points. For a full set of results see here  Team Thurrock now qualify for the regional Final against other County Winners in October. (More details to follow)

Brandon Morris, from Beacon Hill who had competed in Panathlon for 5 years, but never managed an individual win, until today, when he broke the National Panathlon Javelin record with a incredible throw of 26.3m. See pic top left.

Tim Prendergast, a New Zealand Paralympic Champion from Athens, was on hand to award medals and inspire the competitors. He said,  “It is great to see Panathlon providing competitive opportunities, for a full age range from primary to secondary. Its fantastic that teams qualify through earlier rounds and know what they have to do to reach the Finals. There is a great tradition building here, well done to Panathlon for getting the structure right.” 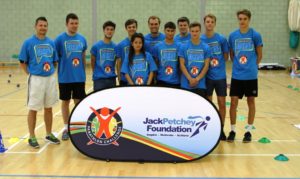 Thanks to all our funders in Essex including Hilton London Stansted, Woodland Group, Jack Petchey Foundation and Stansted Airport.

Thank you also to Active Essex for your support and being part of the wider School Games Finals.