Two highly skilful and enthusiastically fought semi-finals have taken place in the last week to determine our qualifiers for the Essex Final on July 6th.

First off was the North Essex Final last week where 60 competitors from 7 schools took part at Columbus College in Chelmsford.

The teams were Columbus, Harlow and two joint teams of Doucecroft and Southview and also Marketfield teaming up with Shorefields.

The favourites Harlow who out to defend their title and performed strongly by winning Table Cricket and Polybat. However Marketfield and Shorefields teamed up to win the Boccia and the other joint team of Doucecroft & Southview (pictured below in yellow) combined strengths and won Kurling and the field athletics which meant it was incredibly close going in to the athletics races as the last set of events.

Here Southview & Doucecroft once again complemented each others skills and just edged out Harlow to take the title of North Essex Champions 2018. Both teams will also go through to the Essex Final in July.

Andrea Griffiths from Doucecroft School said, “these events teach the students respect and etiquette in a sporting event, but also promotes team work with each other and other schools as today we’re working with Southview”

Carol Park from, Southview school continued; “We had a great day- the students were so happy to have won they were grinning from ear to ear! Thank you for another well organised and fun day, I think its fantastic! We’re not a massive school but they all came together and worked really hard, I’m really pleased for them.

Panathlon gives them so much confidence and allows them to form new friendships and become role models for the rest of the school.”

Nikki Casey from the Jack Petchey Foundation was on hand to award medals and said, “It is fantastic to see how competitive all the children are and how hard they are working.” 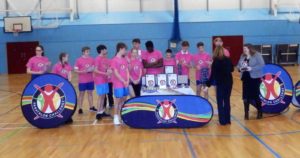 The leaders from this event were provided by Colchester High School and they did a tremendous job. Fergus Crown said, “Panathlon will help with our GCSE P.E. course as it gives us a new experience and shows us how to adapt sports.”

The South Final took place at William Edwards School in Grays, between Glenwood, Beacon Hill/Treetops from Thurrock, Lancaster (Southend) and Oakview from Loughton.

The defending champions and always strong contenders Thurrock, (pictured at the top) made up of Beacon Hill and Treetops School, stormed to victory with an impressive clean sweep winning all 6 events and scoring 60 out of 60 maximum points. 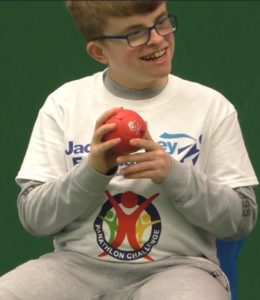 place was Glenwood School from Castle Point and Rochford. A full set of results if you click here.

We caught up with Brandon Mullins, Assistant Head from Beacon Hill School, after collecting their gold medals; “It feels really good, we have a really new team now. We had 11 competitors today and 7 of them are new to Panathlon so its good to see that the students that have left are able to teach the new ones, whilst they’re having fun, and performing at a high level.

We’re looking forward to the Boccia National Finals in Hatfield in April, and we recently won the Regional Panathlon, so 2017/2018 has been our year definitely! The students take away the team spirit from these events, because once they leave school they might not get this opportunity again. And being in a team of sometimes 15 people, all working towards that one goal, its quite a rare thing for SEND students in our school. Being on a team that’s cohesive, stays together and progresses forward together, it’s such a special thing for them.”

Sally from the Thurrock Team tried to improve her Powerchair slalom record but failed narrowly…see her in action here!

The gallery from todays South Final can be seen here

We look forward to the Final at Basildon Sporting Village on July 6th with the teams from Thurrock, Harlow, Oakview and the joint team of Southview & Doucecroft!

Thanks to our funders in Essex including –