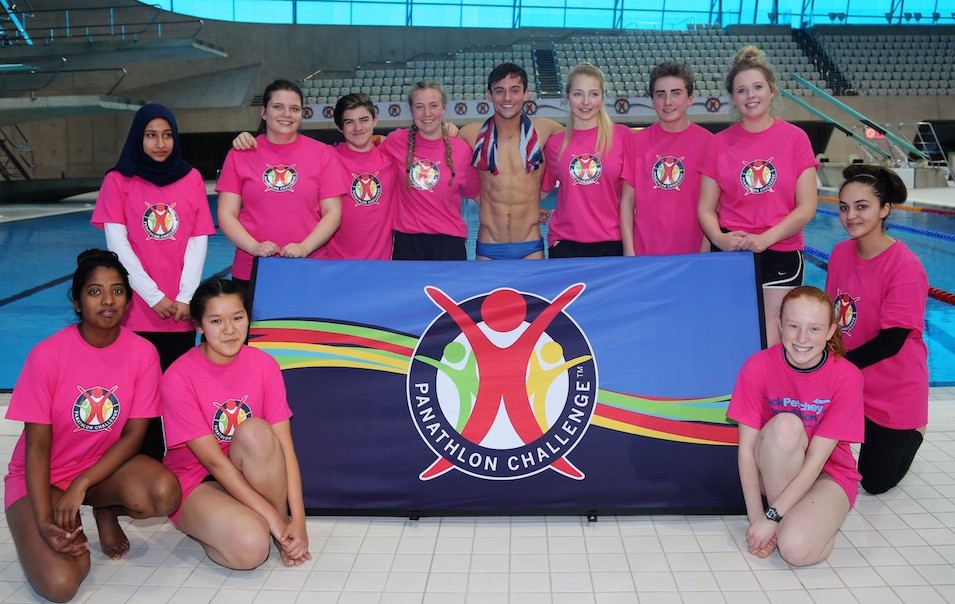 Students competing in the Panathlon London and Essex Swimming Finals got an unexpected bonus as they met Britain’s Olympic diving hero Tom Daley at the London Aquatics Centre.

The heats saw Whitefield School in Walthamstow crowned the London champions and Treetops School in Grays claim gold in the Essex final to seal their qualification for the grand Divisional Final back at the Aquatics Centre in the Queen Elizabeth Olympic Park in July.

Tom, who won gold at the World Championships in 2009 and 2015 and bronze at both the London and Rio Olympics, was full of praise for Panathlon after coming across the young swimmers while he was training at the Olympic venue.

“I think it is a fantastic charity,” he said. “The more people, of all abilities, that you can get involved in sport and health and fitness in a fun and engaging way can only be a good thing.

“And to have this event at the London Aquatics Centre is just another example of the legacy of London 2012,” added Tom, who also posed for the photo (above, top) with Panathlon Young Leaders from Great Baddow High School in Chelmsford and Ellen Wilkinson School in Ealing.

And the diving star helped calm the nerves of students from Doucecroft School from Eight Ash Green, Colchester, who won silver in the Essex heat. Andrea Griffiths, sports coach, said: “They were all a bit nervous coming here, but meeting Tom Daley certainly helped. Many of our students don’t take part in team games so Panathlon provides them with this amazing opportunity.

“It helps build their confidence and self-esteem and also shows them the importance of teamwork.

“The whole day has been absolutely fantastic, all our students have really enjoyed it and been really impressed.

“It has also been great to mix with other schools – many of our students have now made friends with students from other schools.” 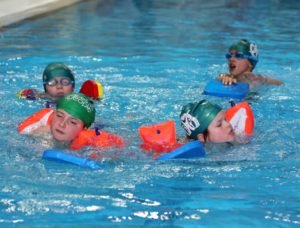 It was a day that would not be forgotten by Essex winners Treetops in Grays, (pictured above left). Team captain, Pavel Yanvareu, 15, said: “It has been a really good day – my favourite part was winning the gold medal. This is an amazing venue, so big, and a once in a lifetime chance to swim here.”

Ryan Jones, assistant headteacher, said: “These kinds of sporting opportunities are difficult to come by, so when Panathlon suggested we took part we jumped at the chance. To be able to come to the Olympic Park with students of all different needs is an amazing opportunity.

“Panathlon is about breaking down barriers and our students have all absolutely loved it. We have had one pupil who has severe autism and is non-verbal, but just got into the pool and started swimming. It was amazing to see.”

Speaking after the school celebrated winning the Essex heat, Danielle Tracey, PE coordinator, said: “It is an amazing achievement and we are all so proud of them. They are all over the moon – it means the world to them. They have worked so hard and shown great team work, they deserve it.”

Columbus School in Chelmsford took home bronze, despite this being their first swimming challenge. Cherie Lashmar, Head of PE, said: “This is the first time we have come to this event although we have supported Panathlon before. It has been a lovely event and all the students have really enjoyed it, taking part in something they love.

“We are lucky to have a swimming pool at school but it is amazing to be here. It has been really exciting competing against all the other schools. Panathlon is a fantastic charity and think about all the extra things like medals which make the students feel like a real team.” 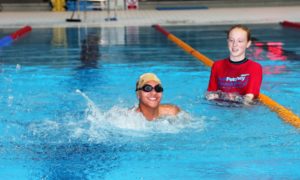 In fourth place were Shorefields students from Clacton. Victoria Beales, sports and leisure coordinator, said: “This is our second event at the London Aquatics Centre although this time we have brought a different group of students so they can experience it.

“All the students were a bit nervous at the start but they had great fun and it was brilliant. Swimming helps their confidence and mobility and we are delighted to be part of this Panathlon event.”

Burnham on Crouch School, in fifth place, is working towards hosting a Panathlon event at the school. Alan Proudfoot, PE teacher, said: “We established a relationship with Panathlon just before Christmas when we took part in a disability boccia tournament at Columbus.

“There are not a lot of swimming opportunities for primary school pupils and we only practiced for this a week ago. But, in terms of aspiration and inclusiveness, the Panathlon event has been absolutely fantastic.

“After what happened in London two days ago, we obviously wanted to respect parents’ views. But they all came in yesterday and said they really wanted to go – they showed a real British spirit.

“I must thank them for their support and also the support of our headteacher Kelly Stock. This is such an inspirational venue – it is a privilege to be here and an amazing opportunity for students.”

Lenny Rush, eight, (pictured left), who has Spondyloepiphyseal dysplasia (SED), a rare condition that affects bone growth in the spine, arms and legs, said: “It has been really good fun – I love swimming. It has been nice being around the other schools and I loved it when the crowd cheered.”

Lenny’s mum, Lisa, added: “The whole event has been absolutely amazing. Ever since Lenny started at Burnham, he has taken part in so many different things. The Panathlon has been brilliantly organised and we have been made to feel so welcome. It is great to have an event that is catered and adapted for disabled youngsters. Lenny is a confident boy but this will give him even more confidence – I am so proud of him.”

London champions from Whitefield School in Walthamstow had trained hard to take home the title. Maria Papazoglou, PE teacher, said: “It has gone very well – we have improved a lot since the last Panathlon competition.

“It has taught the students about competition and how they need to train hard for these events.

“The fact it is in the London Aquatics Centre is added motivation. I was a volunteer at the Olympics and it is wonderful seeing the youngsters compete here.”

Speaking after winning the London heat, Maria added: “They all did so well. They have practiced a lot and the school has been incredibly supportive.

“There are not a lot of swimming opportunities in the borough but we have shown a big investment in them. Today has been about fun but also competition.

“One of the team was a little worried after the events in London on Wednesday but we spoke with his parents and he is really pleased he came now.”

In a closely fought contest in the London heat both Stormont House School in Hackney and Durants School in Enfield scored 35 points, but Durants claimed silver and Stormont House bronze medals on individual win countback.

Durants also won the Panathlon London North competition in the pool. Frances Sutherland, head of upper department at the school, said: “It is just an amazing venue to compete in. All our students have coped so well with this new environment and the organisation has been brilliant.

“These Panathlon events are so important – particular for students with special needs. It gives them an opportunity to compete which they might not normally have. We only swim seven weeks a year so they have loved it.” 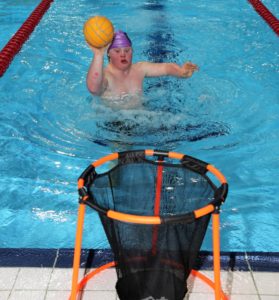 And Stormont House also had a great day. Kamil Hajdrych, PE coordinator, said: “It is a fantastic place to come and the students have all loved it. We all feel very privileged to have the opportunity to come here.

“They are all good swimmers and have participated well, representing themselves, the school and the whole of Hackney very well.

“Swimming gives them pleasure, helps build up muscles and fitness and gives them confidence which they can take outside of the pool.”

Sebastian added: “We have all really enjoyed it. It has been great fun and given our students confidence and awareness of a different environment.

“It has also given them a goal, showing them how to improve against other competitors. The whole event has a great atmosphere.”

And pupils from Belvue School in Northolt felt like Olympians and even made a sacrifice to miss the Red Nose Day disco at school. Mark Squire, teaching assistant, said: “We have been involved in other Panathlon events but nothing like this.

“The students have all loved it. The whole experience has made them so happy – when they first saw the building, they were blown away.

“All day, we have told them they are Olympians and they really feel like this is their Olympics. They all volunteered to take part today, which even meant missing their Red Nose Day disco.” 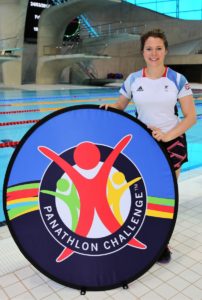 The children did, however, meet their own Paralympian, swimmer and Panathlon ambassador Liz Johnson (right) who had the honour of laying the final title in the competition pool at the London Aquatics Centre, when it was built.

Liz said: “I first attended a Panathlon event in 2008 and it is great to see how the charity has grown in terms of its reach, activities offered and range of pupils taking part.

“Panathlon offers a competitive sporting environment for all. So often it is seen that for minority or disadvantaged groups, taking part is enough.

“But you can learn so much from competitive sport. In my own swimming career, I have learnt about winning, losing, travelling, new environments and working together in a team.

“Panathlon provides this opportunity to develop these skills which are so important throughout life.

“Sport can make people confident and resilient and to be able to hold this event in the Olympic Park is just an added incentive for students and staff alike.”

Panathlon wouldn’t be the same without young leaders to help supervise the heats.   Jessica Ferguson, head of PE at Great Baddow High School, Chelmsford, said she was delighted to continue their support of Panathlon events by providing sports leaders for the Essex final.

She added: “We have helped out at a variety of Panathlon events as the school has a big leadership programme and leadership academy.

“The students also help run our local swimming clubs and get great experience of leading others and taking responsibility.”

Ellen Wilkinson School in Ealing provided support for the London final. Kirstie Rowlands, head of PE, said: “We have been involved with Panathlon before. Our school has 150 sports leaders and this is a great chance to get some real hands-on experience.

“It provides them with an opportunity that they don’t get anywhere else. They see competition in a different way and opens their eyes while also developing self confidence.”

The London and Essex winners now look forward to competing at the Panathlon Divisional Swimming Finals at the London Aquatics Centre in July.

A gallery of photographs can be seen here. 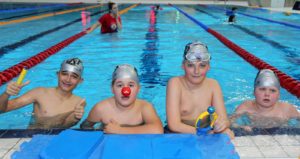 Thanks to the funders of our swim programme including