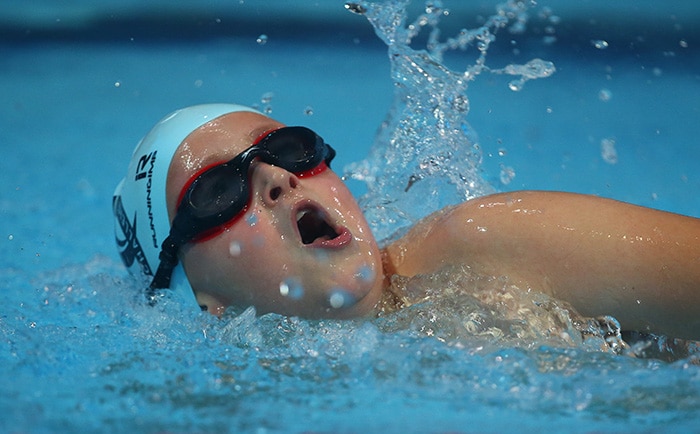 Panathlon’s virtual swimming programme has been hailed as “fresh”, “exciting” and “joyous” by staff at the many schools who have taken part during lockdown.

Our in-school swimming programme features separate activities for use in 5m or 10m pools. It gives school staff ideas to encourage swimmers and non-swimmers with SEND to participate in challenges, raising their confidence in the water and offering a positive experience at an in-school gala.

Competing individually or part of a team, swimmers’ scores are added across the activities to form an individual or team total, which allows each student to compete on behalf of their school. Each school is sent certificates and stickers to mark their achievements.

To date, over 500 students have taken part in Panathlon’s virtual swimming activity since the Easter holidays.

“My pupils have loved Panthlon’s virtual swimming,” says Angela Allen, PE Coordinator at Kingfisher School in Oxfordshire, where over 50 children took part. “I initially decided to do it with only the more able pupils, but gradually introduced the skills to more pupils and was astonished by how many children managed to complete all the events.

“Although we completed the events in class bubbles, I was surprised by how competitive some of these bubbles were. Pupils kept asking to repeat their events to try and improve their time.

“One of the nicest aspects has been how loudly staff members and other pupils cheered as each pupil completed their event. In some lessons, pupils who normally refuse to join in came and signed that they wanted to take part. One or two pupils said they were very pleased to be ‘selected’ to do a Panathlon for the first time!”

Angela says the ‘Flipper’ activity increased pupils’ confidence at floating on their backs and she was able to differentiate with the ‘Treasure Hunt’ and ‘Popcorn’ activities by allowing less-able or mobility-impaired swimmers to complete the challenges in the shallow end. ‘Speedboat’ races have also resulted in pupils becoming more confident at swimming widths and improving their leg kicks, she says.

At Dee Banks School in Chester, 40 pupils across primary and secondary ages have been taking part in the Virtual Panathlon swimming competitions.

PE Lead, Michelle Cook, identified bubbles of 10 from two juniors classes and 10 from two senior classes to compete against each other. She says they were “blown away” by receiving their medals, certificates and Panathlon towels for participating.

“It’s boosted the competitive spirit in the school and encouraged our pupils to really ‘have a go’, which is exactly what I’m trying to achieve,” she says. “It’s about recognising the importance of swimming to young people with disabilities. Using your Panathlon model has really helped build our own framework for how best to engage the pupils in competitive sport across the board.

“The virtual swimming competition has helped build a sense of achievement and we are proud to be part of the bigger Panathlon picture by having you on board.

“It’s always fun for the pupils to have something to look forward to and this was a perfect starting point as we slowly started to emerge from the pandemic and started working with a few bubbles to be competitive again. The pupils listened, worked hard to meet their goals in the races and most of all were really good sports!”

At Charlton Park Academy in south east London, 54 students took part, spread over several weeks as restrictions meant they could only have four pupils in the pool at one time.

“Each class had something to look forward to because they’d do four challenges in one lesson, then the following lesson they did the other three. It was nice because it spread it out,” says the school’s swimming instructor Lisa Inett.

“We really enjoyed taking part in all of the challenges. It’s something a bit different to their normal structured lesson. It was fresh and exciting and more fun.

“It was really joyous to watch them get their medals and certificates at the end of it. That was the most amazing part, seeing their faces light up. They really, really loved it.”

Panathlon’s Chief Operating Officer, Tony Waymouth, said: “Our virtual swimming programme has been vital in giving many pupils a chance to have a competitive gala to supplement lessons now school pools have started to re-open.

“This programme has given children the opportunity to take what they’ve learned in swimming lessons and apply those skills in a competitive environment.

“Our approach to swimming through the pandemic has allowed children who wouldn’t compete in external events to have the opportunity to be part of something bigger.”

Panathlon would like to thank Pentland Brands, funders of our swimming activity, for their support with the launch of this programme and their continued desire to help us give children swimming opportunities and develop skills through the pandemic.