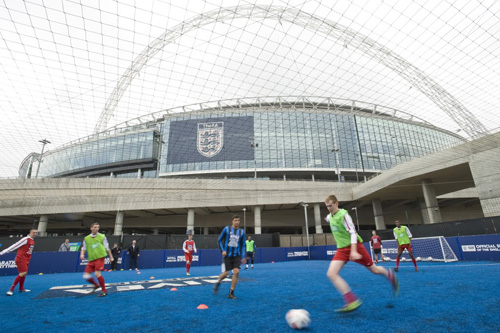 On 27 February, eight excited young teams of SLD footballers, will be arriving at the Powerleague five-a-side pitches in the shadow of Wembley Stadium for the Final of the Panathlon Football competition.

This year’s revamped competition has seen 24 London boroughs take part at under 13 and under 16 level across four qualifying competitions. A new, larger format has ensured competitors have the chance to play more football than ever before, with 261 players mustering an impressive 512 goals on the road to finals day. This time round, the lucky finalists will be Barking and Dagenham, Ealing, Greenwich, Hackney, Haringey, Harrow, Hillingdon and Lambeth.  See here for more details of the qualifying competitions.

Panathlon Football has once again demonstrated just how many young disabled people can be inspired and connected through the opportunity to play competitive sport. Jo Leadbetter, a teacher at Woodside in Bexley, cited the example of Reece, who normally doesn’t take part at all in PE. He played every game in this year’s qualifiers and even bagged himself a goal. “Reece is quite low on confidence and often clings to staff during PE but in this he’s been a revelation. And then there’s Bryon who is normally completely disinterested but we couldn’t get him off the pitch!”

Panathlon are also thrilled to welcome two special guest footballers for the event this year. Josh Beacham has played CP football internationally for the past five years and was a key member of the England side which brought home a gold medal from the 2009 Arafura games in Australia. Josh has competed in two Paralympic World cups in Manchester, winning Bronze in 2010 and silver in 2012.

Ben Lampert plays for the Great Britain profoundly deaf football side. He is approaching fully qualified UEFA B licensed coach status and has recently been instrumental in designing, developing and delivering a new football side specifically for deaf children.

With such distinguished support and over 100 young footballers expected to descend on Wembley Park at the end of the month, this year’s Panathlon finals day promises to be a truly inspiring spectacle. The unique chance to play in the shadow of the legendary stadium is certain to be inspirational for all the children involved. We will report on who becomes Panathlon Football Champions 2014 on Friday!