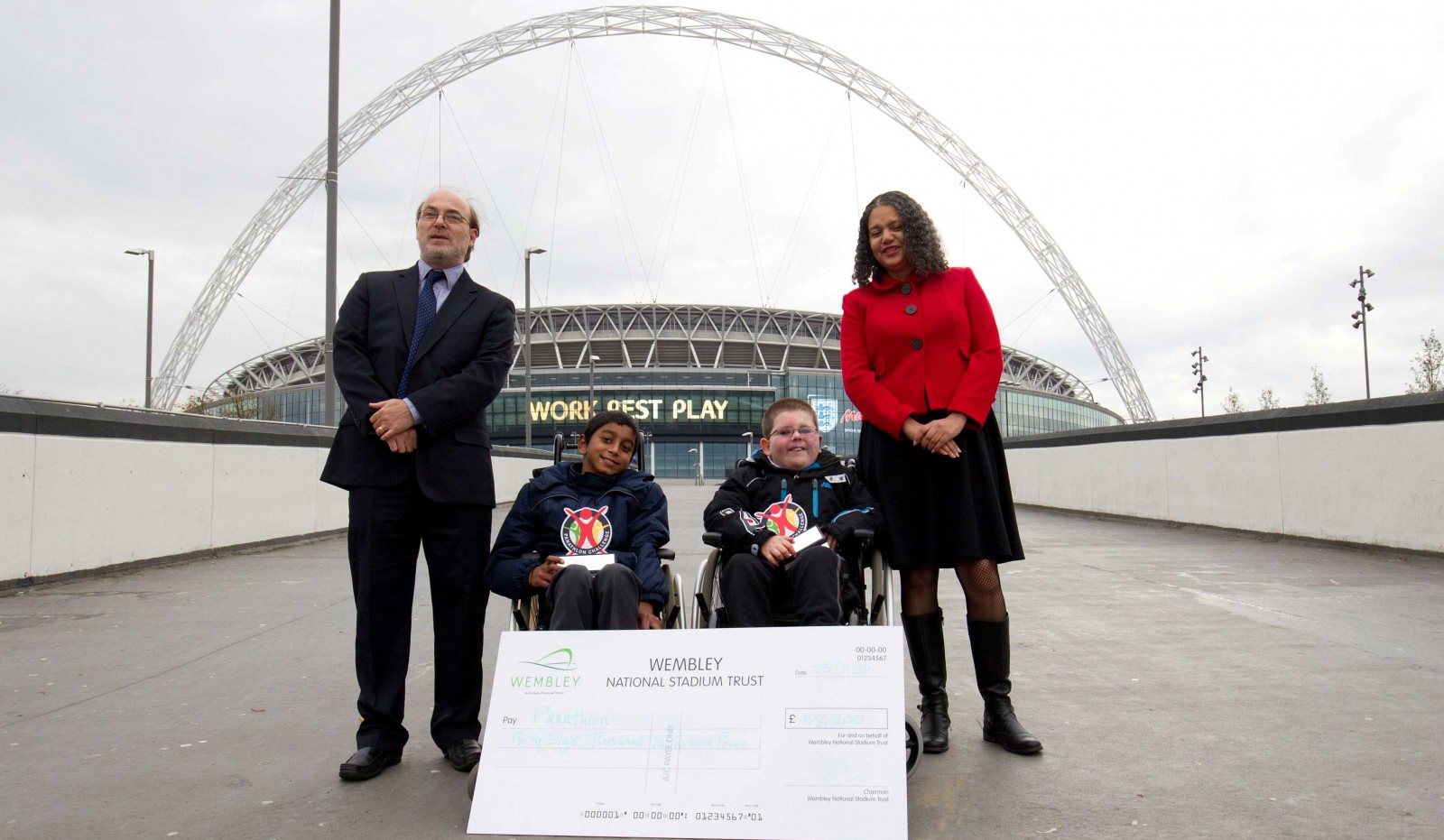 Panathlon has extended its relationship with the Wembley National Stadium Trust (WNST), who will be supporting the extension of the Primary Panathlon programme across London.

The Trust, who distribute funding received from Wembley Stadium to support community sports activities, presented Panathlon with a cheque for £48,000 in the shadow of the stadium’s famous arch at Powerleague Wembley, where the Panathlon Football Cup was being played.

The funding will be used over the next two years to enable more primary-aged disabled children to participate in sport. It builds on a successful pilot of the Primary Panathlon programme, made possible by an initial WNST grant of £20,000, provided in 2013.

Dinah Cox OBE (pictured top right), Trustee of the WNST, said: “Panathlon is absolutely wonderful and exactly the type of project that we want to fund. 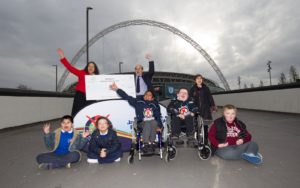 “So many children with disabilities don’t get the opportunity to play sport because people say they can’t. A project like this shows that they can and don’t they do it brilliantly.

“The Primary Panathlon works at an early age, setting out a foundation and creating the pathway for disabled kids to be involved in sport as they grow older, which is so valuable.”

The WNST’s new investment will help Panathlon to provide sporting opportunities to over 2,000 severely disabled primary-aged children across London over the next two years.

It will also help Panathlon to introduce new participants to disability sport through new impairment-specific opportunities at primary age and will also expand the number of people involved in Panathlon’s Young Leaders programme through our swimming and primary programmes.

After a successful first year for the programme that involved 1,744 pupils from 174 schools across London and included a Primary Panathlon for deaf students, WNST’s continued support will help Panathlon create a sporting pathway for over 3,700 disabled young people by the end of 2015/16.

Stewart Goshawk, Chief Executive of the WNST, who fund 12 different disability sports projects across London, said that Panathlon was an ideal recipient of the Trust’s funding.

“It’s a perfect fit,” said Goshawk. “It just works for us. The first year has exceeded expectations and exceeded numbers and gone in directions that even Panathlon itself never expected in the first instance, in bringing deaf schools on board, so it’s one of our real success stories. It’s a great project.

“The enthusiasm at Panathlon events is just brilliant, but what we’ve noticed on a number of projects, including this one, is that what young people want is competitive sport. They want to play and they want it to mean something and that’s what Panathlon does. Everybody participates, everybody contributes and at the end of the day there is a winner. That’s brilliant.”

An independent charitable trust, the WNST redistributes one percent of Wembley Stadium’s gross annual revenue, estimated to be around £1 million, to charities and community groups that encourage the widest possible participation in sport, particularly for young people.

Tony Waymouth, Chief Operating Officer of Panathlon, said: “We thank Wembley National Stadium Trust for their support in the development of the Primary Panathlon programme, which caters for the needs of the primary aged group, something that we hadn’t done before their funding.

“The programme has expanded remarkably and the knock-on effect of the Trust’s London funding, which demonstrates its success, is the demand that the programme has created in other parts of the country.” 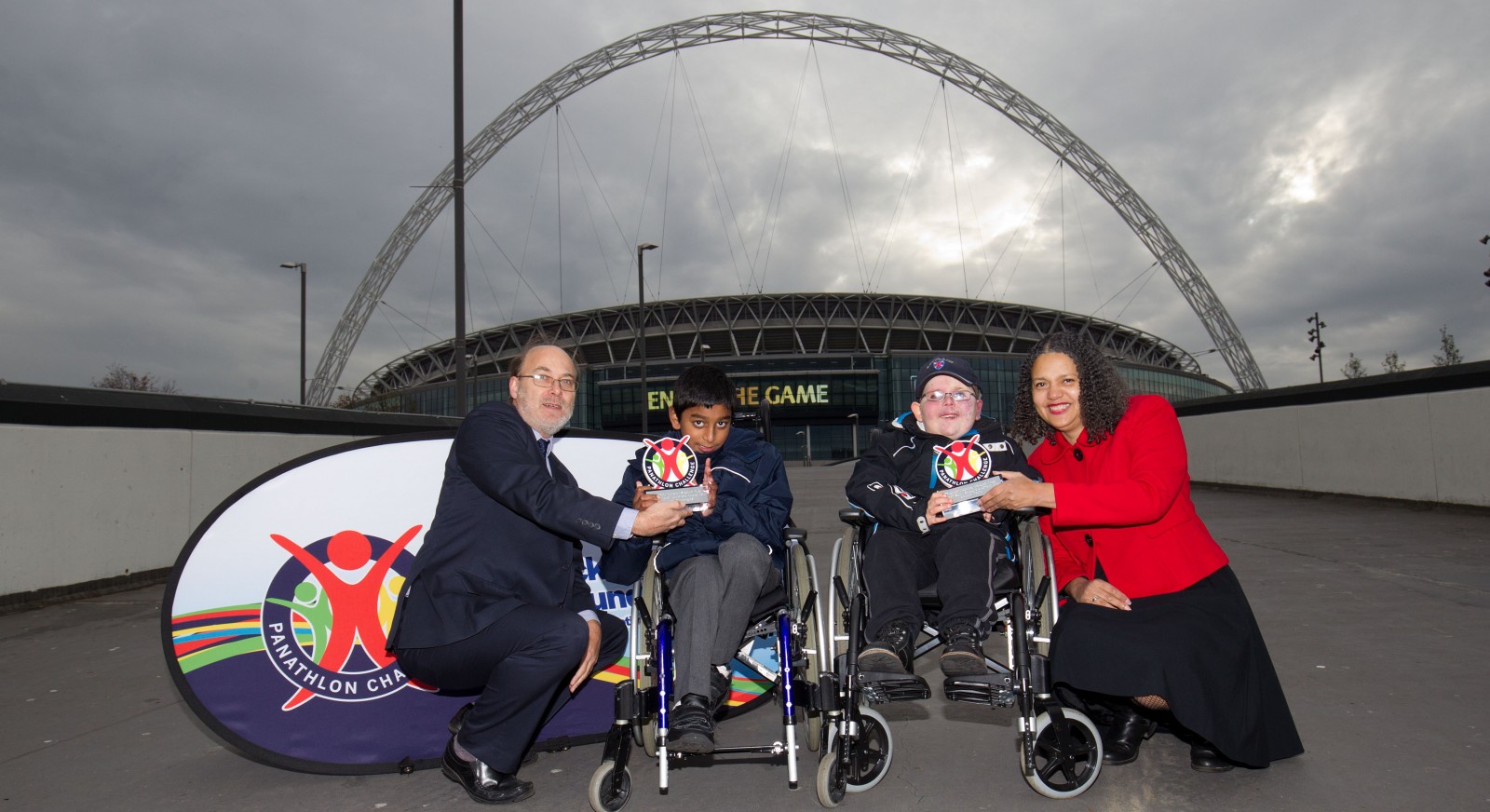 Panathlon has named the first winners of the Wembley National Stadium Trust Primary-Aged Achievers Award, which recognises the achievements of some of Panathlon’s youngest competitors. The joint winners, Kavindu Ravasinghe and Robert Walter, (pictured left) collected their awards from the WNST’s Stewart Goshawk and Dinah Cox at Wembley yesterday.