18 Schools and 162 disabled competitors battled it out for a place in the London Final (at the Copper Box Arena in the Olympic Park) today at St. Mary’s College in Twickenham.

All 8 boroughs had already competed over the recent months to qualify for either the Plate or the Champions competitions, and were ready to up their game for the West London Final. The venue was St Mary’s University in Twickenham, which was an official training venue for several countries for the London 2012 Olympics. The Young Officials were trained by Panathlon last week and performed excellently today.

The Champions half of the draw saw Hillingdon, Sutton, Wandsworth and Richmond compete for honours and the competition was incredibly close. Wandsworth won the boccia, Sutton won Kurling, Polybat and Field Athletics and Hillingdon struck Gold in Table Cricket. That meant scores were incredibly close as the last athletics races took place, and the overall winner had to be decided on countback as Sutton and Wandsworth were tied for first on 48 points, with Hillingdon only 2 points behind on 46. Therefore by the smallest of margins, Team Sutton get to the London Final for the first ever time due to the fact they won 3 sports compared to Wandsworths, 2. Huge Congratulations to them pictured here. 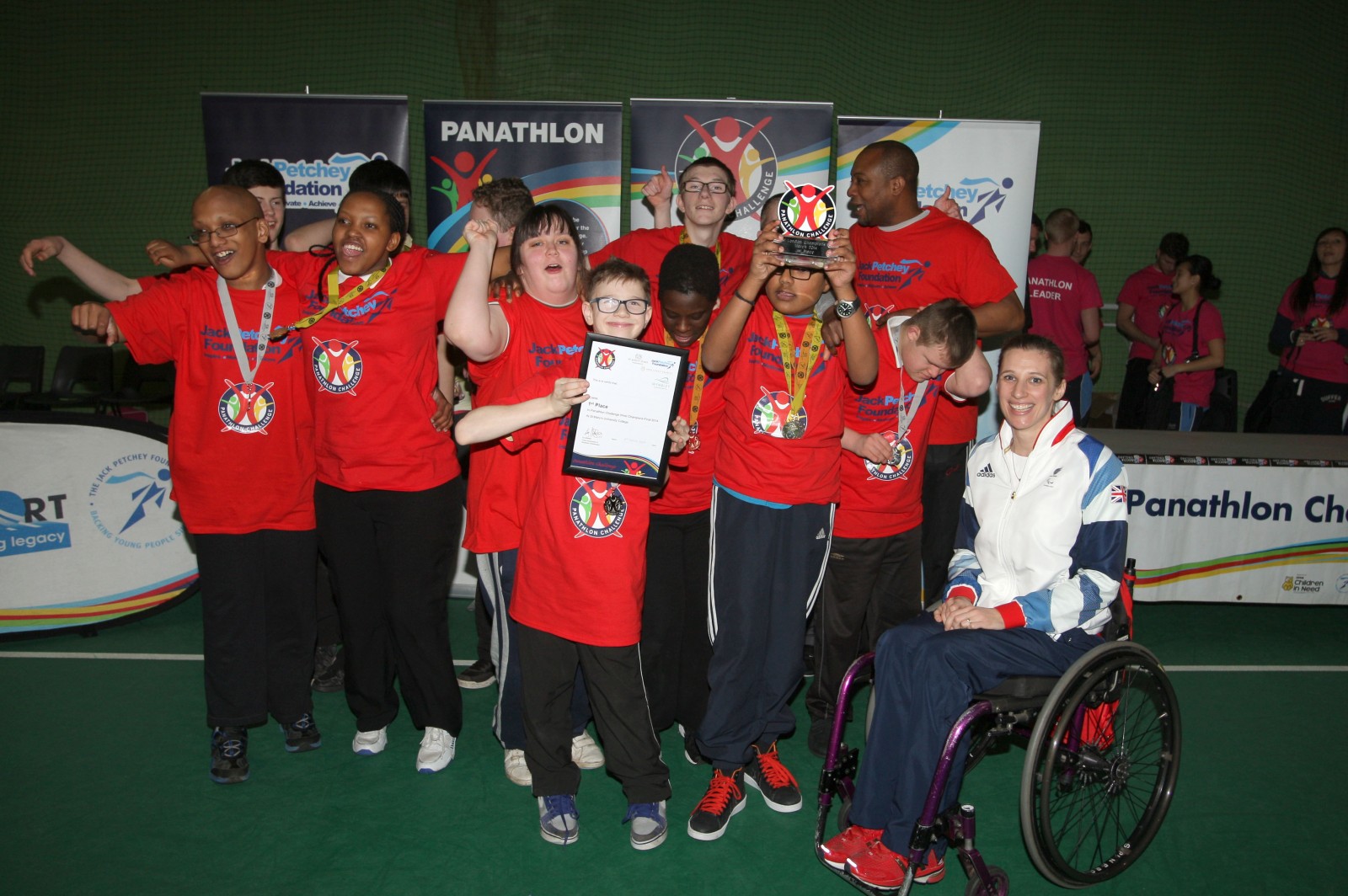 Sue Fergusson & Ganymeade Gnahoui, Teachers at Sherwood Park from the Sutton Team were visibly shocked and delighted in equal measure when the final result was announced. A team that 2 years ago struggled to get through the first round, then last year, finally getting through to their first regional finals, and now in 2014 reaching the London Finals is a major achievement. The mainstay of their team has been the same over these 3 years; so their continued practice and perseverence of their players has paid huge dividends; allowing them to develop their skills over time. This year, for the first time also, they got together with their colaborating Sutton school, Overton Grange, to practice and find out the best combinations between the players for each sport. Ganymeade Gnahoui said, “I am so proud of them! Wow! Look what they’ve achieved!”

On hand to inspire and reward competitors with medals were the Panathlon Patrons and Paralympians, Helen Turner and Louise Sugden, veterans on several Paralympics including London 2012.

The Plate Competition featured Ealing, Merton, Kingston and Hounslow, again shooting for a spot at the Olympic Park Final on June 18.

Merton led the way with wins in Boccia and Polybat and Ealing were competitive with wins in Kurling and Table Cricket. Kingston and Hounslow fought well too, but in the end despite Ealing’s best attempts, they couldn’t catch Merton who became Plate Champions. See results here

Warren Mariott, Teacher from Perseid School in Merton was also delighted that his pupils had got to their first event London Panathlon Final. Hounslow and Kingston battled it out for the 3rd Place position, so much so that they ended up tieing on equal points, 36 a piece. Kingston took the 3rd place victory after an indepth countback.