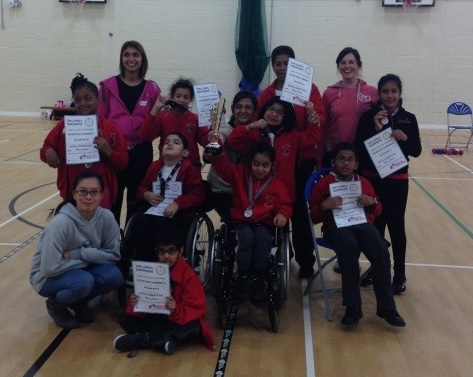 On the 3rd December, Panathlon held the Lord Taverners U19 Boccia Competition for physically disabled competitors at Ellen Wilkinson School for Girls. There were 33 students from West London Boroughs. Six schools attended with 8 teams competing to determine who would qualify for the London Final in February.

This is one of 3 competitions Panathlon is delivering on behalf of Boccia England to decide the teams for the Final, and then the winners will go through to the National competition, with the Final taking place in Sheffield later in 2014. last years London Winners, St Giles School (previous Panathlon Champions) battled through to the National Final and came 7th overall.

In the early stages, Coteford Junior School looked unstoppable, unbeaten in all of their box matches. As a result, it was Coteford who met John Chilton School in the first semi-final, whilst Hounslow Heath A team and Jack Tizzard A team filled the other semi-final spots.  Two exciting semi-finals resulted in John Chilton ending Coteford’s winning streak to book their place in the final alongside Hounslow Heath, who played extremely well against Jack Tizzard School.

The final was expected to be extremely close and with a big crowd looking on, the atmosphere reached fever pitch when a draw at the end of the match forced a tie break. It was Hounslow Heath who went on to lift the trophy and will qualify alongside a fantastic John Chilton School team. Congratulations to all that took part.

Panathlon had trained 10 young leaders and qulaified them as Boccia Young Officials from Ellen Wilkinson school, and they performed their duties impecibly throughout the day. Well done to you all.