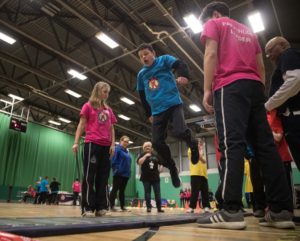 Represented by Swindon’s Brimble Hill and Uplands schools, Wiltshire saw off rivals from Oxfordshire and Northamptonshire to claim the top prize.

They were up against Kingfisher School, Abingdon, representing Oxfordshire, who took silver with 46 points, and Corby Business Academy of Northamptonshire, who came third with 44. Chilton Gate School in High Wycombe, the Buckinghamshire champions, were unable to attend on the day and compete in the regional finals.

Keen competitor Gemma Commons, 19, of Uplands School, said: “I knew we would win again. I just knew it. This is fantastic. I am very excited and happy.  I just love the table cricket, which we won a gold in too.”

Uplands’ head of Lydiard House and Key Stage 3 teacher Gemma Stevens, said: “It is great that Panathlon has brought us to Stoke Mandeville so the students can prove their physical abilities and social skills.  They have been very engrossed in the boccia, which is so therapeutic.”

She added that the Panathlon is particularly beneficial for student Harley Stockwell, 12, who had been the sole competitor in the wheelchair slalom, but had managed to get round the course in 32 seconds – almost a record.

Harley was proud of his gold medal for the wheelchair slalom but said he also loves boccia because it is such fun.

Silver medalists Kingfisher School took gold in the boccia and polybat. Student Kyle Briers, 19, said he liked all the games, but boccia is top of the list. “We are pretty good as a team because we practise this every week,” he said.

Kingfisher lead teacher Nikki Farmer said this is the third year the school has competed in a Panathlon: “It’s so inclusive and a great environment with sport for all abilities,” she said.

Bronze winners Corby Business Academy won four silver medals in table cricket, new age kurling , polybat and athletics flat. Teacher Janice Hingley said: “Panathlon is an incomparable opportunity for all to do a physical activity and have a social experience.”

Student Ronan, 17, won an individual silver medal in the standing long jump. “I’m good at that. It’s my best sport,” he said.

Sixth Form students from Marlborough College, who last year hosted the Wiltshire qualifier, volunteered as Young Leaders, to supervise the competitors and record the scores.

Chris Kirkwood commented: “We had to get up at the crack of dawn but it is so worth it to see them smile so brightly when they win a medal.”

Carla Henderson added: “I feel the same. We help at Brimble Hill twice a week so the children know us. It is so rewarding.”

Panathlon’s chief operating officer Tony Waymouth said: “It is great to be back in Stoke Mandeville with such large numbers of competitors.

A Primary Panathlon for central region schools also took place across the hall at the Stoke Mandeville Stadium with seven teams competing.

The victors were St Peter’s School in Burnham, Bucks, with 54 points. Their Head of PE Stephen Garner said: “This has been fantastic. We are a small school and don’t normally get to competitive sporting events. This is the first time, so to take the gold medal is fantastic.”

For a full gallery of pictures from both the day’s events at Stoke Mandeville Stadium click here.

For a full set of results from both events click here.