Our friends at the Woodland Group took their long-term support of Panathlon one step further – well, 100,000 steps to be more accurate – with a fundraising trip up and down the famous national Three Peaks.

On the roasting hot August Bank holiday weekend, a team of 13 Woodland Group staff tackled the challenge of trekking up and down the highest mountains in Scotland, England and Wales – Ben Nevis, Scafell Pike and Snowdon – inside 24 hours. The journey equates to over 10,000 feet of ascent and 26 miles of walking – and also the mere fact of 462 miles driving in between!

A 6am start on Saturday from the Glen Nevis lodge saw the first team reach the summit of Ben Nevis before 9am (see pic top left) and the others follow not long after. The first to return were down within two and a half hours of leaving the summit to have a quick sausage sandwich energy boost. The rest of the team were back over the next hour or so and all were then ready to start the long journey to 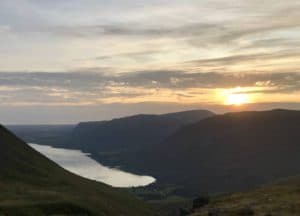 The team arrived in Wasdale Head a bit later than anticipated and started the trek up Scafell as the sun was starting to set.  (See right!) This meant a gloomy summit for those that made it and a dark descent for all.

There was no time to hang around and we were all off to Wales by 10.30pm. Great thanks must go to Luke Fermore, our driver, who after sleep and rest was ready to drive us for the next leg of the journey.

A 3am arrival at Snowdonia saw the intrepid team set off wearing head torches. Despite wandering off course in the dark at some stage, the summit team arrived just before the 24 hour deadline of 6am! 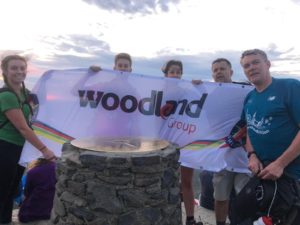 A beautiful sunrise was just peeking over the hilltops and after a few quick pics and refreshments, the long walk back down the tracks of the Snowdon railway to Llanberis saw the team re-united just after 9am.

Nancy Gill, European Operations Coordinator at Woodland Group (pictured below with Katie-Louise Thompson-Friend) said: “This was the most challenging and overwhelming weekend of my life!

“Doing the Three Peaks in 24 hours – braving heights, lack of sleep, 20 odd miles of hiking and the 3064 metre ascent was all in support of the Panathlon charity, who we all are delighted to support. I’ve learnt things about myself that I never knew. It was a weekend I will never ever forget!” 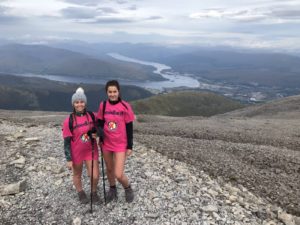 Katie-Louise, (right in the hat!) who first had the idea of the challenge and who organised the trip, said: ” I am unbelievably proud!! Completing the Three Peaks in 24 hours was the biggest challenge I have ever faced. I’d like to say well done to the whole team.”

Ashley Iceton, CEO of Panathlon reflected on the trip by adding: “A huge thanks to my fellow trekkers who clambered up and down mountains, with hardly any time to rest or draw breath in between.

“I would like to especially thank Katie-Louise for organising and Luke for driving us around and the rest of the Woodland Group for their long term support.”

The team’s fundraising page is here should you wish to show your support. Thank you everyone at Woodland and we look forward to the next adventure together!