The competition was split into two, with a winner from each side of the sports hall receiving gold medals.

Thirteen schools took part in all, involving 136 competitors – with the day’s young leaders provided by next door high school Cumberland.

Daniel Putt, Woodlands’ PE instructor, was thrilled with his pupils’ gold medal-winning feat, saying: “Some of these kids don’t ever get the chance to have a go at sports, so they’re chuffed beyond belief.

“They struggle a lot with their school work, so for them to be able to get back to class and be justifiably proud of something they’ve done is just tremendous. It’s great for their character and attitude.

Ethan Impey, 11, of Carpenters (pictured below), added: “People under-estimate what special needs children can achieve. Today shows how good we can be. I’ve enjoyed it so much. My favourite bit was the football; I scored four goals.” 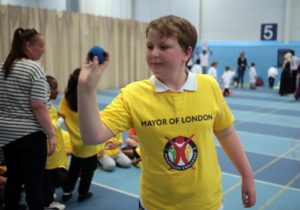 Nicola Allen, senior teaching assistant, added: “We’re absolutely over the moon to have got the gold medal.

“The great thing about these events is the kids get to play wth children who are at their own level. They really feel like they’re achieving something. We’ve got all our age groups mixed together, which doesn’t often happen, so it’s great fun, with plenty of morale and support for each other.”

Three Primary Panathlon events have been staged in Newham each year since 2012, but this event saw three new schools join the competition – Redbridge, Grove and Winston Way.

This year’s expansion is thanks to a renewed three-year funding agreement with the Mayor of London.

“We are glad to continue our association with the London Borough of Newham,” said Panathlon’s Chief Operating Officer, Tony Waymouth.

“Event after event sees us attract new schools and embed Primary Panathlon further into the Borough. The continuation of funding from the Mayor of London’s office has seen not only new schools get involved, but also new year groups of children and the opportunities for increased learning.”

Bremila Thavarajah, SENCO at one of the day’s Panathlon debutants, Winston Way (pictured below), commented: “It’s lovely that it’s local students running the games, because the kids seem to make more of an effort and listen more attentively. It’s so well organised and makes PE more accessible. 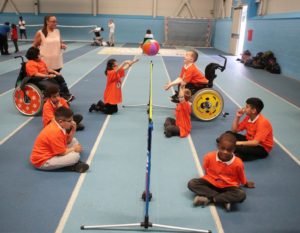 “As much as we try in school, we don’t necessarily have all the equipment or skills to put on activities like this. They get to see other schools and children with similar disabilities. Because it’s a mixed age group they get to spend time with children they wouldn’t normally hang out with, which is lovely.”

Ellie Stewart, 10, a pupil at fellow first-timers Grove, said: “It’s been a lot of fun! I liked the volleyball best because you got to hit the ball at people! I wish I could re-live the day all over again!”

Gemma Bowl, LSA at the Romford-based school, commented: “Our Panathlon debut has been fantastic. Everyone has been really helpful with lots of encouragement.”

Robeyn Khatum, supervisor at third-placed Curwen School, said: “We’ve enjoyed it immensely. There’s a big variety of activities. We’ve taken part in Panathlons for about five years and it gives the children so much confidence. I run a Year Two sports club, so this is brilliant for inspiring new ideas.”

Eyad Hassan, aged seven from Curwen School, added: “I’ve enjoyed it so much. The kurling was brilliant. It makes me happy!”

Nick Crickmar, lead sports instructor at nearby Cleeves School, said: “We always have a fantastic day at these events. It helps me introduce some of these sports into PE lessons. I use this as an activator. Although we’re very inclusive, some of these children might not always take part, so we’ve got our own sensory stand-alone PE session and we’ve introduced some of these games like boccia and new age kurling into that. These children have already got the confidence and experience from today, and they can teach the other children. It’s fantastic for their confidence.”

Martin Nathaniel, aged eight, added: “Throwing the toys on the numbers was my favourite. I scored 22! Today has given me loads of happiness!”

Kaye Cornwall, HLTA at Redbridge School in Ilford, said: “This is our first time and we’ve thoroughly enjoyed it. In school they perhaps don’t mix so much, but here’s there’s been a real team spirit, all cheering each other on. I didn’t know about this competition; if I’d have known about previous ones, we’d definitely have come. We will most definitely be at the next one!”

The day’s young leaders were provided by Cumberland School, whose PE teacher Steven Robinson commented: “It’s great for them to mix with the younger ones and develop their leadership skills, so they don’t feel uncomfortable in new environments like this. It gives them an opportunity to come out of their comfort zone, try new activities and build their self-esteem, which they can take into other areas of life and become rounded individuals.”

One of the young leaders, 13-year-old Ayuub Mohammed, said: “This gives us good communication skills, because some of the children find it difficult and you have to find ways of explaining the games.” 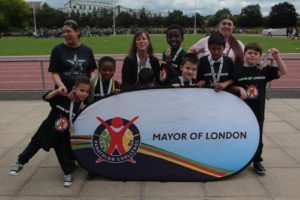 Denise Watts, teaching assistant at Scott Wilkie School in Newham who won gold at last week’s boccia event and are pictured right, observed: “Panathlon does absolute wonders for their self-esteem and independence. They struggle academically, but they come here and they can win. When they go back with their medals and the other children see they’ve won, that is just priceless.” To see more photos, please click on this picture on the right.