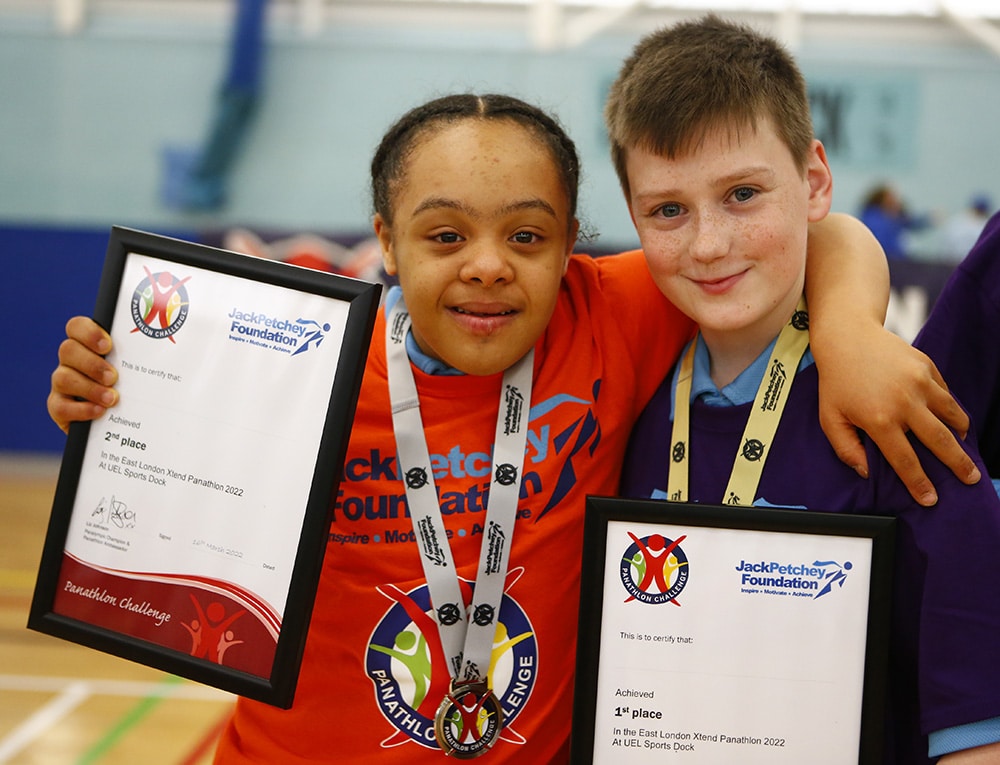 Panathlon’s East London Xtend Finals made a poignant return to UEL Sportsdock two years to the day since our last pre-pandemic event at the spectacular venue by the Thames.

Over 100 pupils from nine schools took part in two competitions on Wednesday (March 16) with Morpeth School from Bethnal Green winning the morning event and Royal Liberty in Romford collecting gold medals in the afternoon.

Panathlon’s Xtend competitions target Key Stage 3 pupils to bridge the gap between primary and secondary school SEND sport provision. Many pupils taking part on Wednesday were in Year 7, so had missed out on the many traditional final-year memories at primary school.

For most, it marked the first time they had left their high-school gates to take part in an external event. That was the case for New Bridge Special Needs School, whose Complex Needs Teacher, Steve Golding, said: “Trust me, this is huge for these pupils. They have become so insulated within their households and school. Other teachers have been scared of taking students out, but I can see here what it means to them. You should have seen how excited they were this morning.”

Diane Pennant from morning gold medal winners Morpeth School said: “In the last two years they have spent all their time indoors so taking part in a safe and accessible event like this is such an amazing opportunity.

“It has fostered really good communication skills amongst pupils who don’t usually talk to each other. One boy here has always refused to come out of school but he is here now and I’m seeing him communicate in a way I have never seen before. That’s because of the environment Panathlon has created.

“They are all experiencing a sense of achievement. They are overwhelmed that they’re hitting targets, getting good scores and competing on the same level as other schools. The t-shirts also give them a big sense of belonging and being part of a team.”

For pupils from Phoenix School in Bow, the day also marked a release from the shackles of Covid-19. “This is our first outing,” revealed class teacher Shelina Mannan. “It’s such a wonderful opportunity, not least in the context of the last couple of years. In terms of sport, they really don’t get many chances like this.

“The games are perfectly suited to all their different ability levels. Emotionally they are self-regulating and this gives them such independence, the chance to interact socially and be part of a wider community who are just like them. There is such a sense of excitement – we cannot thank you enough!”

Juda Boateng, 12, from Royal Liberty School beamed as his gold medal was hung around his neck. He said: “I have enjoyed it so much because I got to see how me and my team-mates work under pressure. It’s like being part of a community. I’m going to put my medal in my big cabinet!”

Just this week, pupils with SEND at Drapers’ Academy in Romford had started an inclusive sports club at break times where they practised some of the Xtend disciplines in preparation for the Panathlon East London Final.

“From next week they are going to keep practising every lunchtime and we’ll be opening it up to pupils outside this team,” said PE teacher Maria Griffin. “It will be a springboard for future Panathlons and potentially the London Youth Games.”

Maria added: “It impacts massively on these guys, especially those who previously wouldn’t partake in PE at all. Here they are happy and excited to participate. It gives them confidence to give new activities a go.

“We have pupils who are in different year groups but are now working closely together and forming friendships. They would never have come to a university before so it opens their eyes a little bit and prompts new conversations.”

The social impact on competitors was also highlighted by Ruth Bright, Teaching Assistant at Phoenix School. Some of their pupils were competing in a third Panathlon in two weeks following recent successes at our football and multi-sports competitions.

“We’ve had so much positive feedback from parents who have noticed a change in them,” said Ruth. “They missed out on so much at the end of primary school and parents perhaps lost faith they could achieve to the extent that they would bring home gold medals.

“These pupils didn’t really know each other a couple of weeks ago but Panathlon has bonded them into a great team. They are just happier!”

Both the day’s competitions were officiated and guided by Young Leaders from our hosts University of East London’s Sport, PE and Development degree course. They included Jordan Andrews whose association with Panathlon stretches back a decade.

He won our 2012 Jack Petchey Foundation Sporting Achievement award and took part in a London 2012 test event at the Olympic Stadium with 20 others Panathletes. To this day, he still holds the record in our standing long jump event at 2.84m, set in June 2013.

Joining Wednesday’s Young Leaders was special guest Georgie Hart, another decorated former Panathlon Jack Petchey Foundation award winner. She attributes her reading of the Panathlon Oath before our London Final at the Copper Box Arena in 2015 as giving her the confidence to go on and flourish in many aspects of her life, inside and outside of the sporting arena.

On hand to award medals, trophies and certificates on Wednesday was Jack Petchey Foundation’s Head of Partnerships Paul Davies. His daughter is a previous Panathlon competitor but this was his first experience of seeing a competition with his own eyes.

“I love the way that it incorporates a strong element of competition, not just taking part,” he said. “It’s important for children to experience a competitive but safe and positive environment. The opportunity to be the best they can be is vital.”

There were ‘Panathlon VIPs’ aplenty at Tuesday’s East London Multisport Final to witness Barking & Dagenham and Waltham Forest book their tickets to the Copper Box Arena in June. Barking…